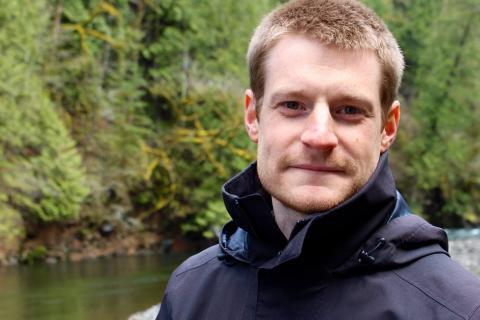 Graduating from UC Berkeley as a cognitive science major in 2006, conservation biologist Paul Elsen would have never guessed that he would return to Berkeley a decade later to become a postdoctoral scholar in the Department of Environmental Science, Policy, and Management. Following completion of his M.A. and Ph.D in Ecology and Evolutionary Biology at Princeton University, Elsen returned to the West Coast and is now a David H. Smith Conservation Research Fellow at Berkeley, seeking to mitigate biodiversity loss around the world by developing strategies to prioritize which montane species (organisms which inhabit mountainous lands) and landscapes to protect as these regions are affected by climate change. Specifically, Elsen is using computational models, and running them on Berkeley Research Computing’s (BRC) high performance computing cluster, Savio, to examine how climatic shifts will occur in mountains, predict how species will respond, and evaluate where protected areas can aid in future conservation.

Although Elsen’s studies on species conservation are broad in scope, he chose to specialize on species conservation in mountain ranges because mountains frequently hold high levels of biodiversity, there are a wealth of significant, pre-existing datasets on mountainous areas, and montane species are particularly vulnerable to climate change. Considering 20-25% of the Earth’s landmass is covered in mountains and the variety of climates on those mountains, there are many opportunities for data collection, modeling, and analysis within this field--an opportunity Elsen found intriguing.

As the climate warms, mountains typically experience shifts in ecosystems. The bases of mountains gets warmer and precipitation patterns change, creating a cascade in which each higher band of elevation on the mountain changes as well. Sometimes referred to as “the escalator effect”,this forces certain flora and fauna to migrate up the mountain in an effort to remain within the “optimal thermal conditions” to which they had become adapted over the course of their evolution.

When Elsen started out as a postdoc in 2016, he sought out a variety of campus research support providers in the hope that they could provide him with both computational hours and hardware. Upon hearing a colleague mention Berkeley Research Computing (BRC)’s high performance computing cluster, Savio, Elsen contacted BRC consultant Aron Roberts; discovered that many hours of computation were available under the Faculty Computing Allowance to which the faculty member with whom he works, Adina Merenlender, is entitled; and thus began running his analyses through Savio. In the beginning Elsen said there were “multiple hurdles”, such as figuring out how to split up large mountain ranges into smaller units. However, with some trial and error Elsen became familiar with the HPC cluster and analyzing his data in segments sized to the capacity of available HPC nodes.

There are two projects Elsen is currently working on through Savio: exploring species distributions and how they respond to changes in climate, and examining the global distribution of protected areas along elevational and climatic gradients. In the end, Elsen hopes to combine these two projects in order to make recommendations about where future protected areas should be located based on predictions of how/where species will move from their existing locations.

For his first project, Elsen began by attempting to assess the prevalence of species in each area for which he has data. The records of observed species that he used dates back to the 1800s, when Berkeley faculty and other scientists began cataloging species and their occurrences, and depositing these observations in campus collections such as the Museum of Vertebrate Zoology and the University and Jepson Herbaria. However, in addition to potential inaccuracies within old datasets, especially with respect to geolocation, data documenting where species were observed during a given field expedition represents, as Elsen put it, “only one snapshot of time.” In his research, Elsen prioritizes the inclusion of data on species that are sensitive to environmental changes (like logging or changes in temperature), are restricted geographically to a narrow niche, and are limited by unique dispersal barriers. Ideally, Elsen would like to include the broadest possible coverage of species, as species vary in the degree to which they n will be impacted by climatic shifts.

After collecting the data on how many species are observed at specific locations on different mountain ranges, Elsen obtains models of elevation, whereby the Earth is divided into grids, with each square representing 30x30 meters, the highest resolution global dataset currently available. Savio’s capacity permits him to run computation at a finer resolution than he was using previously, a dataset consisting of 90x90 meter grids. With each 30x30 meter square represented by one pixel, Elsen is currently trying to analyze around 4 billion pixels (some mountain ranges are represented by hundreds of millions of pixels). Attempting to run these analyses on his personal computers often kept them them occupied with loading and analyzing the data for days on end. Switching to a supercomputer both freed up Elsen’s personal devices, allowed for larger computations, and made the computational work faster.

For his second project, Elsen will use Savio to analyze the distribution of protected areas by comparing the current climate and projections of how climates are expected to shift within these protected areas. Right now, there are a variety of different climates found in protected land. As the climate changes, the climates found within protected areas may no longer be suitable for the species living in them. So, as species move out of the protected areas in an effort to survive, they will protect few of the original organisms they were designated to safeguard. Using the data from his first project on climates in which species have historically lived, Elsen can combine the information from both projects to predict where species will need to migrate to thrive or survive, and make policy recommendations on how to restructure protected areas. This type of data analysis is important because it has the potential to influence where ecological corridors should be placed, where restoration projects may be important, or where land should be acquired by NGOs or governments to best ensure species will persist in the future.

For more information on Elsen’s research visit his website. If you are interested in learning more about Savio or other services offered by the Berkeley Research Computing Program, visit Research IT’s website or email research-it@berkeley.edu.