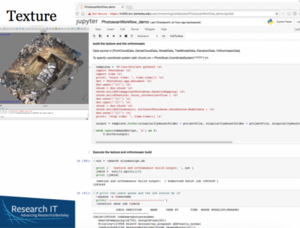 Librarian-led research incubators, e-portfolios for promotion and tenure, content creation for visualization walls, and bulk OCR using a high performance computing (HPC) cluster shared the stage at UCLA on February 23rd for the second Digital Humanities Infrastructure Symposium. Organized by UCLA’s Center for Digital Humanities, the symposium drew together librarians, researchers, instructors, and IT staff from throughout the region for a day of presentations and discussions, centered on a broad definition of “infrastructure.”

Quinn Dombrowski and Maurice Manning from UC Berkeley’s Research IT gave two talks: “Supercomputing meets cultural heritage: supporting photogrammetry at scale” and “OCR: Precision and Scale.” The photogrammetry talk described how Near Eastern Studies professor Rita Lucarelli and her graduate student, Kea Johnston, have used the Savio cluster to develop 3D models of Egyptian sarcophagi. In addition, it featured some of Maurice’s recent work developing a Jupyter notebook for photogrammetry, to make the process more accessible for researchers who are less comfortable using the command line. Quinn and Maurice were joined by colleague Tassie Gniady from Indiana University, who described the automatic photogrammetry workflow implemented on a virtual desktop that IU offers its researchers. The OCR talk featured Research IT’s two offerings around OCR: an AEoD virtual desktop with ABBYY FineReader for small-scale, precision OCR jobs, and a Singularity container and associated Jupyter notebook for running the open source Tesseract OCR software for large-scale jobs.

The symposium highlighted the ways that Digital Humanities (DH) courses and projects intersect. Digital Watts, a public digital humanities project, was developed by students who engaged in digitization and metadata creation as part of an associated course. The Digital Art History 101 website was developed for use in a pedagogical context, but with the kind of deliberate planning around platform choices and sustainability that often characterize DH research projects.

Training and professional development were another common theme. A team from the Claremont Colleges Library presented their five-week “Introduction to DH” training for librarians and staff, which culminated in proposing and implementing small projects in teams. Similarly, the DResSUP (Digital Research StartUp Partnerships) for Librarians program within the UCLA Library has built upon an existing incubator program for graduate student projects, in order to train librarians.

Organizational infrastructure was featured in a number of talks. Rachel Deblinger reflected on the first year of operations for the Digital Scholarship Commons within the library at UC Santa Cruz, which has been supported by the library and the humanities division. SD|DH (San Diego Digital Humanities) served as an example of a robust, successful regional infrastructure that is facing new challenges and transitions as a period of grant funding is coming to a close. In an engaging satirical performance, Mark Marino from USC described the Humanities and Critical Code Studies (HaCCS) Lab, his unfunded research group that serves as an example of how real research and relationships can emerge from virtual spaces.

The Digital Humanities Infrastructure Symposium also served as the first in-person meeting for a subset of the participants in a virtual “DH in Research/Central IT” group that Quinn convenes regularly, for DH support staff in non-DH groups to discuss projects, experiences, and opportunities for collaboration. A larger subset of the group will meet this summer at the international Digital Humanities conference in Montreal, where they will be presenting on the opportunities for humanities research support and “alt-ac” employment that can be found in research computing groups.