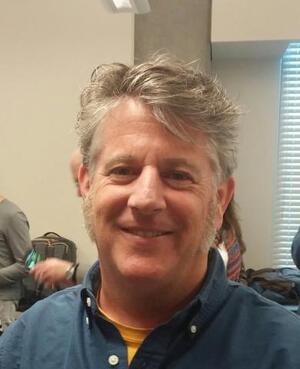 Research IT’s Associate Director and BRC Program Manager Patrick Schmitz will retire from his role at UC Berkeley after twelve years of visionary and foundational contribution to supporting computationally- and data-intensive research on the campus he first joined as an undergraduate in 1978. Patrick also earned a Masters of Information Science degree from Berkeley’s School of Information in 2007, after a couple of decades away from the campus during which he worked in seven startup companies (several of which he co-founded), the Netherlands National Research Institute for Mathematics and Computer Science, as well as Microsoft Research, and Yahoo! Research.

Shortly after joining the campus staff in 2007, Patrick taught a course on metadata management and analysis at the School of Information, giving him insight into the campus from the other side of the lectern -- and completing the trifecta of roles in which he has contributed to the campus: as a student, a member of the staff, and an instructor. (Actually, there’s a fourth: Patrick is the parent of an alum. His daughter graduated from UC Berkeley in 2013.)

Patrick’s 2007-8 work with the Phoebe A. Hearst Museum of Anthropology (PAHMA) to build Delphi, the first public, semantic-search collections browser for that museum’s 3.8 million objects, transitioned naturally to his technical and architectural leadership of the consortium developing the CollectionSpace museum collections management system. These two threads of his passion for supporting cultural heritage and natural history museums converged recently, when PAHMA’s Delphi browser was replaced by a modern integration with CollectionSpace implemented by Research IT’s CSpace team.

From 2008-2012, Patrick also participated in Project Bamboo alongside David Greenbaum, Steve Masover, and many others as UC Berkeley joined the University of Chicago and over 100 U.S., European, and Australian universities in exploring what “cyberinfrastructure” could mean to the Arts and Humanities, and how groups like Research IT could effectively support non-traditional users of computing and data services. He worked closely during this period and beyond with researchers in Near Eastern Studies Department both at Berkeley and a number of other universities to develop tools for prosopographical research (historical social network analysis), picking up a very few words of Sumerian and Akkadian, and a keen enthusiasm for the history of the ancient near east.

In 2013, as UC Berkeley’s Research IT began to constitute itself, Patrick took a lead role in designing and building the Berkeley Research Computing (BRC) Program. At its launch in May 2014, Patrick introduced the Program’s services, plans, and the broad access provided, in a range of computational modes and models, to research domains across the full range of UC Berkeley’s academic departments. As BRC gained the attention of peer institutions, Patrick participated in an ecosystem of organizations at a national level that support Research IT at U.S. universities. Notably, he helped to grow the new Campus Research Computing Consortium (CaRCC) and has taken a significant role in developing CaRCC’s Research IT Maturity Model, which he and the CaRCC working group will co-present in a half-day workshop at this summer’s PEARC19 conference, and to which Patrick will continue to contribute after leaving UC Berkeley.

Of his dozen years on the staff, Patrick says, “I have most enjoyed working with the incredible staff, faculty, and students here at Berkeley. I have learned so much, and have proudly supported the mission of this great University.” Patrick cited the colleagues with whom he worked on committees in recent years, including the VCUE Equity and Inclusion Committee, the IST Workforce Development Working Group, and development of the ReIT “Telling Our Story” workshop series.

If history is any guide, Patrick will continue to make significant and notable contributions to the use of information technology in advancing knowledge and the preservation of cultural, natural, and intellectual heritage. We count ourselves fortunate to have benefitted from his leadership these past dozen years, and wish him every joy and success in his future.