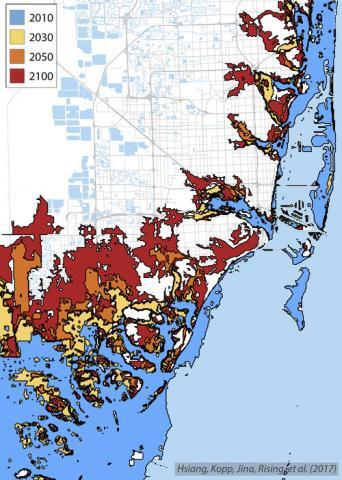 How might one measure the social cost of carbon? This is the question that brought more than 20 climate scientists, economists, data analysts, engineers, and researchers together at the Climate Impact Lab (CIL). With members from UC Berkeley, the Energy Policy Institute at the University of Chicago, the Rhodium Group, and Rutgers University, the Lab formed out of an assessment that it is critically necessary to understand how climate change affects the United States in social and economic terms.

Solomon Hsiang, a Chancellor's Associate Professor of Public Policy at UC Berkeley, leads the Lab along with Professor Robert Kopp of Rutgers University, Energy Policy Institute at the University of Chicago Director Michael Greenstone, and Rhodium Group’s Trevor Houser. They combine climate research, economics, and data science to push the boundaries of research on several frontiers. This year, the team produced a study [1] published in Science estimating the economic damage from climate change in the U.S. over time as well as its effects on vital sectors of concern, including mortality, migration, labor productivity, and agriculture.

Expressing data about the physical effects of climate change in monetary terms allows the team to effectively present their findings to audiences of businesspeople and policymakers. James Rising, a postdoctoral scholar at the University of Chicago and a contributing author to the Science article, explained, “It’s a really across-the-board understanding of what climate change is going to do to us.” For every degree Celsius of warming, for example, the study predicts a loss of 1.2% in Gross Domestic Product (GDP). However, this loss could be reduced in effect, given the right countermeasures. “It turns out,” Rising said, “as long as we stay below about two degrees of warming, we’re only losing about half a percent of GDP per degree Celsius. But after two degrees, the average is more like 2.5-3%. So there are really a lot of incentives, [both socially and economically,] to work on this issue.”

The Climate Impact Lab’s estimates allow regions in the United States — and, as the scope of its work broadens, the world — to assess how their area will be impacted by climate change over time using metrics that are familiar inputs to policymaking. The CIL’s findings were generated by using the outputs of climate models simulating the range of temperatures different regions will experience, their assessment of the physical effects of conditions the climate models predict, and econometric modeling that estimates the monetary cost of these effects.

Much of their analysis, Rising noted, would have been largely impossible without access to a High Performance Computing (HPC) cluster. The team at the Climate Impact Lab uses Professor Hsiang’s condo on Berkeley Research Computing’s (BRC) Savio cluster, along with other computing resources, to accelerate their research in several ways. To understand the impact caused in multiple dimensions of human activity and experience (agriculture, disease, crime, etc.), they used Rackspace and a powerful workstation at the Goldman School of Public Policy to combine more than 100 climate models with high resolution temporal and spatial data, generating the results published in the Science paper that quantify a range of social and economic impacts in each region of the U.S. Now, as the Climate Impact Lab expands its work to the global scale, researchers use Savio to examine 43 climate model simulations, aiming to update the global Social Cost of Carbon while delivering local estimates of climate change for the 25,000 global regions they study.

Because of the large number of regions, the large time span of the analysis, the number of scenarios, and the uncertainty involved in many of the key variables, the CIL requires a large amount of computational power to examine the full range of uncertainty in impact predictions across many climate models. The Climate Impact Lab runs thousands of Monte Carlo draws to assess the uncertainties inherent in their predictions. Professor Hsiang explains, “The Savio cluster has been instrumental to our progress! Our team members from around the country are constantly utilizing the power of the condo, and we regularly take advantage of the low-priority overflow capability of the larger cluster. In multiple instances we have been up against a hard deadline and the compute we could access through Savio was the key to getting across the finish line on time.”

The CIL also employs computational resources at the University of Chicago, a powerful workstation run by Professor Hsiang’s colleagues (equivalent to about half the computational power of his Savio condo), and commercial cloud resources; however, Rising emphasized that the team has “been able to do an incredible amount with BRC and BRC alone.”

Michael Delgado, a research analyst with the Rhodium Group and another contributing author to the Science paper, added that he and his colleague Justin Simcock, a Rhodium Group data engineer, have used Savio to prepare large, high resolution climate data sets that represent different use cases and types of human activity. For example, by varying the spatial weight used to look at the impact of climate change in spheres such as mortality versus agriculture — where mortality is concentrated in urban areas, and agricultural impact occurs in regions that are farmed — Delgado and Simcock were able to dramatically reduce the amount of error in their estimates. “There are all kinds of different types of data that we need to prepare for econometric research, and all kinds of nonlinear transformations,” Delgado said. “Essentially, the more sophisticated the use case, the more important the care of that data. That’s something we’ve only been able to do because of all this computing power.”

According to Delgado, one of the most significant findings from their published research was that the social and economic impacts of climate change play out unevenly across different regions of the United States. Much of the impact, they discovered, is largely dependent on the region’s current conditions. Areas that are already hot, for example, will face more extreme days of very high temperatures over time, whereas regions prone to flooding will face more frequent and severe floods. “The way that the spatial inequality expresses itself also lines up with current inequality [in the U.S.],” Delgado explained. “Climate change ends up hitting the poorest [counties] much harder on average across the United States than richer ones.” To help quantify the scope of climate change impacts, it is helpful to understand that — without climate-mitigating intervention — increases in frequency and severity of heat waves in the U.S. are predicted to cause about as many deaths by mid-century as are currently caused by car accidents. These concrete, measurable, and understandable results, the researchers hope, will motivate government and businesses to incorporate climate change mitigation in their planning and decision making.

As the Climate Impact Lab extends its research to global scale, researchers will begin producing their own climate data sets that extend further into the future than those prepared by NASA, to expand the temporal range of their analyses. Professor Hsiang and his colleagues also aim to include in their analyses the feedback of climate change’s impact on growth dynamics and other economic activity, rather than treat climate as a simple input.

Reflecting on future research trajectories, Professor Hsiang notes, “The CIL is working to compute the global economic cost of climate change, based on real world data and at an unprecedented resolution. This involves thousands upon thousands of simulations that build on big-data analyses and high resolution global earth system models. It's a lot of computational heavy-lifting, something we could never have been able to do even ten years ago, but it is worth it because this type of information has a real impact on how decision-makers and normal citizens understand the challenges we face. There is something very different in how people understand abstract numbers about global GDP growth, the usual output from global analyses, compared with the more granular and actionable information we provide describing how climate change will impact their local community.”

As their research continues to grow, you can explore on the Lab's website how climate change impacts regions in the U.S. and around the world, both historically and to the end of the twenty-first century.

From astrophysics to zoology, BRC is proud to support researchers like Professor Hsiang and his colleagues through computational resources like Savio. For more information on how to leverage your Faculty Computing Allowance, become a condo contributor, or figure out what university and national resources are most appropriate for your project, email us at research-it@berkeley.edu.

Floodplain for Miami, FL (image, top right): Simulations of areas inundated by 1-in-100 year floods under median sea level rise under business-as-usual (RCP8.5) warming, accounting for forecast changes in tropical cyclone activity. The analysis covered the entire US coast, this image is for Miami, FL.