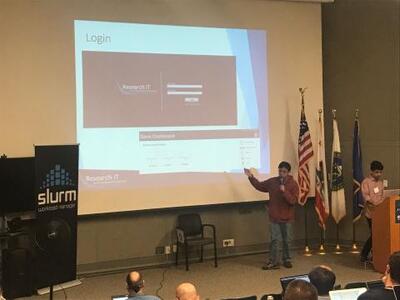 Over the past year, our 2017 interns at Berkeley Research Computing (BRC) have been hard at work developing a banking system in SLURM, Savio’s cluster management and job scheduling system, in response to user input. Their project will allow Savio Faculty Compute Allowance and Instructional Compute Allowance recipients to track their allowance usage and subdivide the allowance for allocation among the account’s individual users. As described previously, the SLURM banking system is being developed alongside a new Savio dashboard, which will provide users with an intuitive, visually appealing way to access and navigate each user’s account and allowance usage.

In September, interns Sahil Hasan and Harrison Kuo presented this project to an audience of other SLURM users and developers at the 2017 Slurm User Group meeting, hosted by the National Energy Research Scientific Computing Center (NERSC) and SchedMD. Held across a span of three days at the NERSC Lab in Berkeley, the meeting included technical presentations, tutorials, and site reports on ways SLURM is continuing to be extended and advanced by users across the country and around the world.

At the meeting, Hasan and Kuo fielded questions about their project with the assistance of project supervisors, Krishna Muriki and Yong Qin. “There was a lot of expressed interest [in the SLURM banking system],” Hasan noted, adding that several attendees at the meeting were interested in following up with the project once it reaches its completion.

Currently, the project is still in development, with hopes that both the banking system and Savio dashboard will be completed by the end of the year. If you’re interested in following the development of this project, take a look at Hasan and Kuo’s slide deck and watch this space for more updates!