CollectionSpace, the collections management software used by numerous campus museums and supported by Research IT, has been extended over the years by a number of additional web applications (webapps) which provide functionality not included in the core system. These webapps, like the regular CollectionSpace user interface (UI), run in a browser window and are accessible to anyone who has a computer with an internet connection and a suitable browser.

The first suite of webapps were written in 2012 to support the massive move of the Phoebe A. Hearst Museum of Anthropology (PAHMA): this gigantic museum, one of the largest anthropology museums in the United States, had long ago overflowed its available physical space on campus and objects were stored all over campus and in several off-campus locations as well. The long-anticipated move enabled the museum to consolidate its holdings in new, improved space in Richmond, which in turn allowed the museum to surrender space in two earthquake-unsafe buildings and to use the Kroeber Hall space for collections related to exhibitions, teaching, and graduate student access.

The move required both updating the basic metadata (‘key information’ such as field collection place and cultural affiliation) as well as verifying and updating the location records for hundreds of thousands of objects to reflect the physical move. The regular UI was not up to this task -- it only provides a means to update one record at a time -- so webapps were developed that allowed users to update and move large numbers of objects at one time. The first webapp was the Systematic Inventory (depicted below) which allowed museum staff to quickly find and inventory museum holdings in a range of locations.

Screenshot of the Systematic Inventory, nicknamed “the Inventorinator”

Later, other webapps were developed. Portals (see below) enable public access to the collections; the Bulk Media Uploader supports uploading large batches of images. At the time of writing, there are 25 unique webapps in use at the five UCB museums using CollectionSpace, providing other varieties of needed functionality.

Some of these webapps meet a unique need. For example the Bed List report for the UC Botanical Garden (UCBG) lists all the specimens in a bed, with filters for rare and living specimens. The Power Move webapp, written to support the recent move of the Berkeley Art Museum / Pacific Film Archive (BAMPFA), was an extension of the Systematic Inventory webapp written for PAHMA and allows move registrars to move multiple crates, even roomfuls of objects, in one fell swoop.

Others are more generic:

To date, eight deployments of the Portal have been made for four UCB museums (most museums have an Internal Portal for staff use and a Public Portal that is available to the world. Not all museum data is public!). In July 2016, this code was contributed to the CollectionSpace project as part of the release of version 4.4.

Even before that, some of these webapps were adopted by CollectionSpace users beyond UC Berkeley. The Watermill Centre, an art institution in Water Mill, NY, and a recent adopter of CSpace, has deployed the Portal webapp to provide public access to their collection. 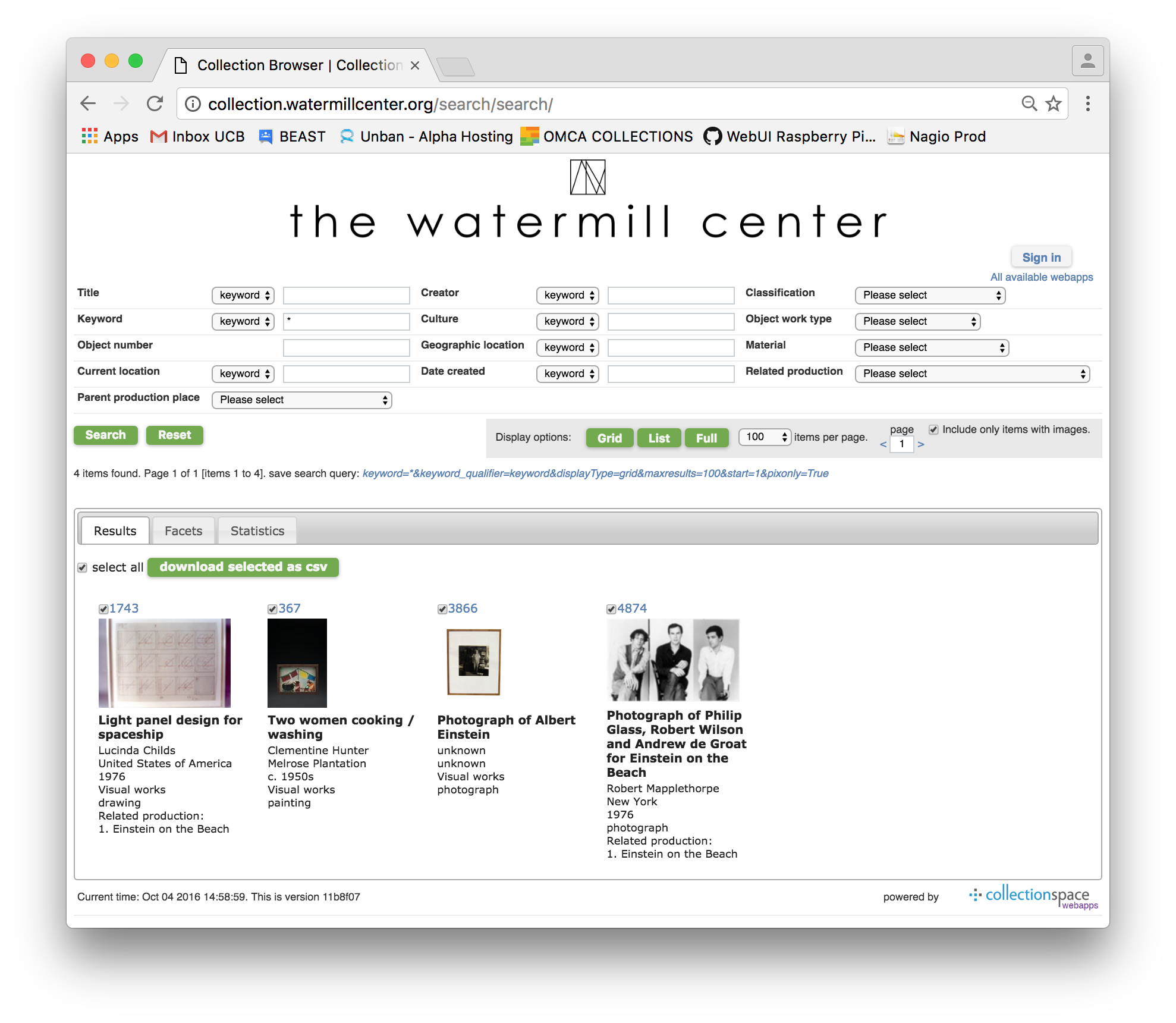 Currently, all the OMCA webapps including the Portal, are ‘internal use only’, so only the screenshots below are available to see what their deployments look like. 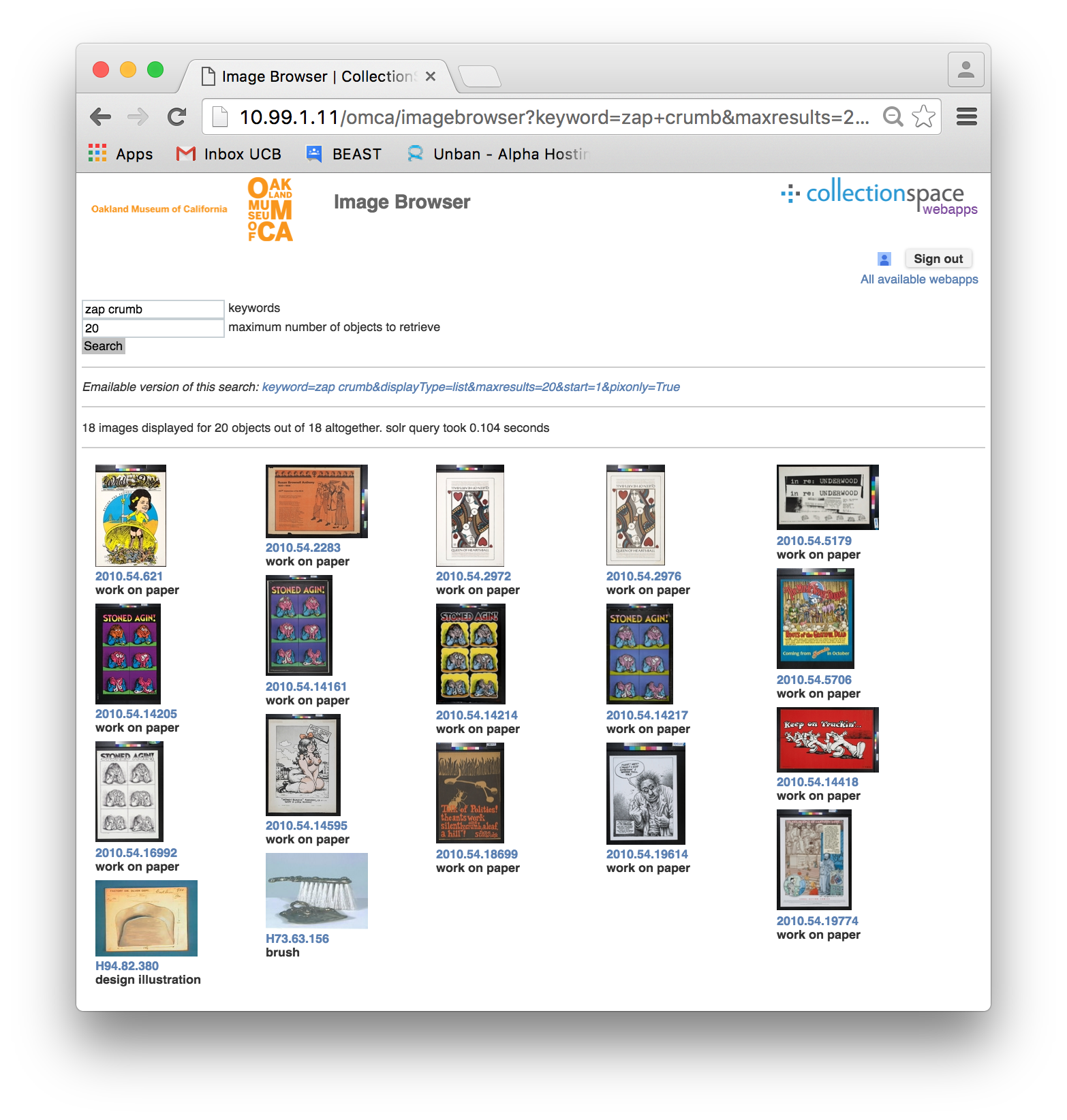 The Image Browser as deployed at the Oakland Museum of California 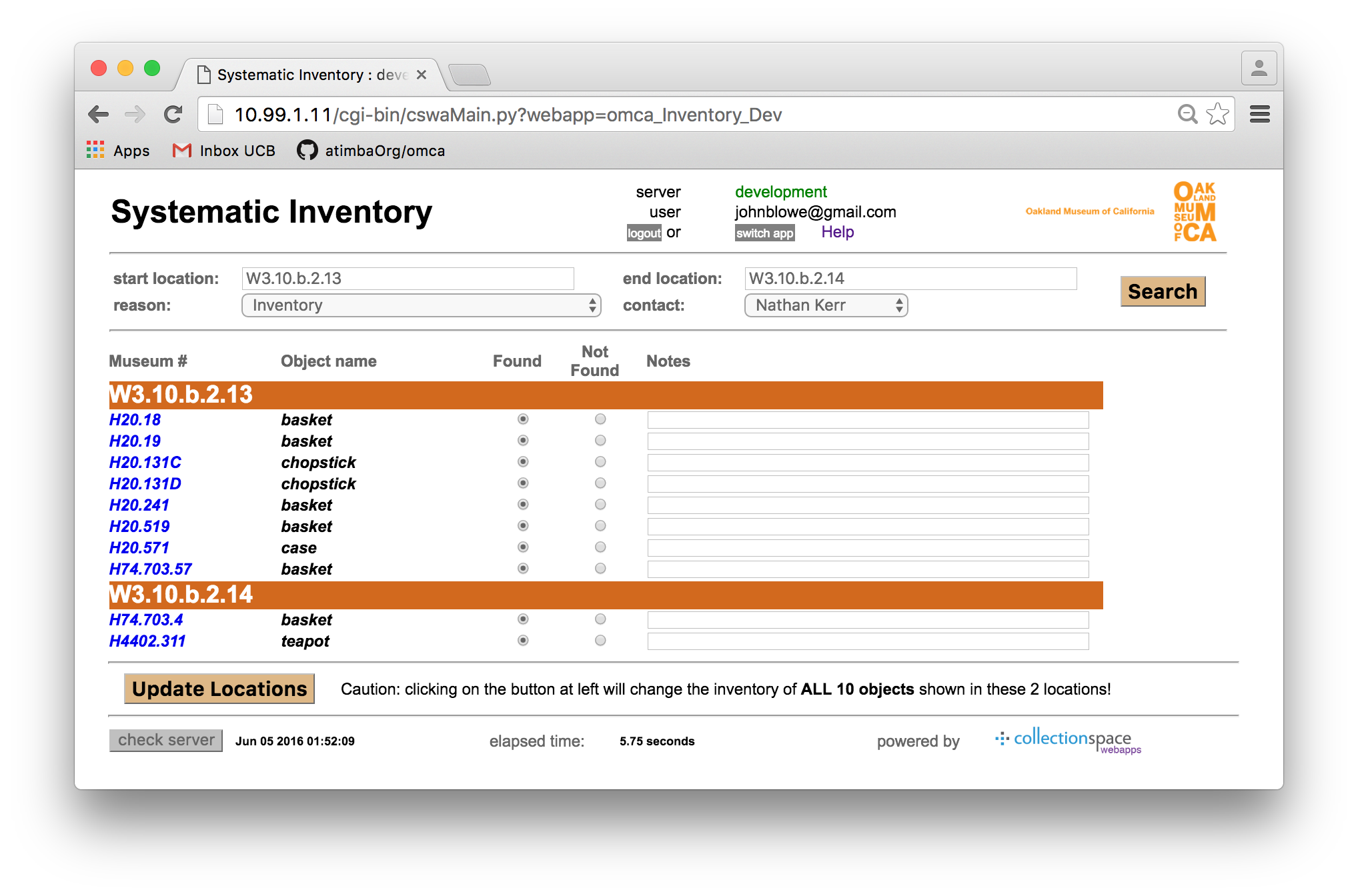 The Inventorinator deployed at the Oakland Museum of California

Over the next few months, the original authors of webapps will be giving them a makeover. John Lowe, Service Manager for CollectionSpace@UCB and Amy Wieliczka, Engineer and UX Designer at Research IT, will be giving them a good soap-and-water going-over to improve the user experience and refactor backend code. In addition, they will be starting the process of migrating all the different webapps into a single software framework (Django, a web framework for Python) and making it easier to (eventually) tightly integrate them with the core software.